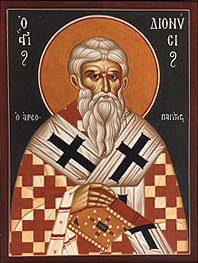 by Dionysius the Areopagite

St. Dionysius lived originally in the city of Athens and received a classical Greek education. He then went to Egypt, where he studied astronomy at the city of Heliopolis. It was in Heliopolis, along with his friend Apollophonos where he witnessed the solar eclipse that occurred at the moment of the death of the Lord Jesus Christ by Crucifixion. Upon his return to Athens from Egypt, he was chosen to be a member of the Areopagus Council (Athenian high court). When the holy Apostle Paul preached at the place on the Hill of Ares (Acts 17:16-34), Dionysius accepted his salvific proclamation and became a Christian. For three years St Dionysius remained a companion of the holy Apostle Paul in preaching the Word of God. Later on, the Apostle Paul selected him as bishop of the city of Athens. And in the year 57 St Dionysius was present at the repose of the Most Holy Theotokos. He interpreted the doctrine of ecclesiology and authored many other books as he described the orders of the incorporeal powers and how they glorify and hymn God. His writings are so detailed that we must assume that he learned of these mysteries through revelation.
(Current day academics believe author to whom the works of Dionysius are ascribed is most likely a Syrian monk living at the end of the fifth and beginning of the sixth centuries who used Dionysius the Areopagite as a pseudonym for writing Mystical Theology, the Divine Names, and other works.)

The following are short excepts from his works Celestial Hierarchies. The entire work can be found at this link and the links you find below will expand on the short excerpts.

• What is Hierarchy, and what the use of Hierarchy?
Hierarchy is... a holy order and knowledge and activity which, so far as is attainable, participates in the Divine...(more)

• The meaning of the name 'Angels'.
...the super-essential Deity, having through His Goodness established the essential subsistence of all, brought all things into being… the holy ranks of the Celestial Beings are present with and participate in the Divine Principle in a degree far surpassing all those things which merely exist, and irrational living creatures, and rational human beings... Wherefore they, above all, are pre-eminently worthy of the name Angel because they first receive the Divine Light, and through them are transmitted to us the revelations which are above us... (more)

• Which is the first Order of the Celestial Beings,which the middle, and which the last?
...Theology has given to the Celestial Beings nine interpretative names, and… three threefold Orders. In the first rank of all he places those who... dwell eternally in the constant presence of God, and cleave to Him, and above all others are immediately united to Him. ...the teachings of the holy Word testify that the most holy Thrones and many-eyed and many-winged ones, named in the Hebrew tongue Cherubim and Seraphim, are established immediately about God and nearest to Him above all others… The second... contains the Powers, Virtues and Dominions, and the last and lowest choirs of the Celestial Intelligences are called Angels, Archangels and Principalities.

• Of the Seraphim, Cherubim and Thrones, and their first Hierarchy.
Seraphim means 'those who kindle or make hot'...
Cherubim denotes abundance of knowledge or an out-flowing of wisdom.
... being immediately present with God..., to it are brought the first revelations and perfections of God before the rest... (more)

• Of the Dominions, Virtues and Powers, and their middle Hierarchy.
Dominions... a certain unbounded elevation to that which is above, freedom from all that is of the earth, and from all inward inclination to the bondage of discord...true Lords, perpetually aspiring to true lordship, and to the Source of lordship...
Virtues...a certain powerful and unshakable virility welling forth into all their Godlike energies; not being weak and feeble for any reception of the divine Illuminations granted to it...fashioning itself, as far as it may, in virtue; perfectly turned towards the Source of virtue...
Powers...an orderly and unconfined order in the divine receptions, and the regulation of intellectual and super-mundane power... (more)

• Of the Principalities, Archangels and Angels, and of their last Hierarchy
Principalities...Godlike princeliness and authoritativeness in an Order which is holy and most fitting to the princely Powers, and that they are wholly turned towards the Prince of Princes, and lead others in princely fashion...
Archangels, through its middle position, participates in the two extremes...is seen to be the cause of the union of the Angels with its own orderly and invisible leadership...
Angels... fill up and complete the lowest choir of all the Hierarchies of the Celestial Intelligences...more directly in contact With manifested and mundane things. (more)

• Recapitulation and summary of the Angelic Hierarchies.
...Each Order is the interpreter and herald of those above it, the most venerable being the interpreter of God who inspires them, and the others in turn of those inspired by God. For that super-essential harmony of all things has provided most completely for the holy regulation and the sure guidance of rational and intellectual beings by the establishment of the beautiful choirs of each Hierarchy; and we see that every Hierarchy possesses first, middle and last powers.... (more)

• What the traditional number of the Angels signifies.
This also is worthy, I think, of intellectual consideration, that the scriptural tradition respecting the Angels gives their number as thousands of thousands and ten thousand times ten thousand, multiplying and repeating the very highest numbers we have, thus clearly showing that the Orders of the Celestial Beings are innumerable for us; so many are the blessed Hosts of the Super-mundane Intelligences, wholly surpassing the feeble and limited range of our material numbers...

• What is the meaning of the formal semblances of the Angelic Powers?
sacred symbols which, although it falls far short of their full interpretation, will yet contribute to prevent us from lingering basely in the figures and forms themselves. (on the symbols used in describing angels)