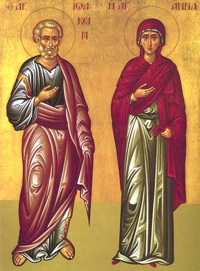 The first five chapters of the Protoevangelium of James contains information about the conception of Mary’s Mother Anna. The validity of this material is accepted by the Church. Anna was descended from the family of David. Mary's father, Joachim, was of the tribe of Judah and from Nazareth of Galilee. Anna was the daughter of a priest from Bethlehem and of the tribe of Levi. Joachim was a shepherd but very wealthy as he had large herds of sheep. He was also a most generous man. He divided his things into three parts: One he gave to orphans widows, strangers and the poor. Another he gave to the temple and the last portion he kept for himself. Joachim married at the age of twenty and they lived together for some fifty years without children. They vowed to the Lord that if He would grant them children they would dedicate their child to the service of God. This condition of being without child was cause of great humiliation in these times. For a woman not to bear a child was seen as a curse from God. Jewish parents believed that a part of them lived on in their children so to be without offspring was to exist in name only.

This all changed during Hanukkah (Feast of the Dedication) and the Feast of the Lights which was celebrated for eight days. Joachim was preparing his gifts to be offered as a sacrifice at the Temple. As he brought his offering he was scorned for his childlessness and left the temple in tears. Having been rebuked by the priests of the temple he did not wish to return home. Instead he went to his flocks of sheep and took them up to a place far up on the mountains. He pitched his tent there and said, “I will not go down either for food or drink until the lord my God shall look upon me; prayer shall be my food and drink.” 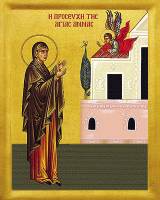 At the same time Anna seeing how Joachim was disgraced she went home in tears expressing great regret over her childlessness for which she felt responsible. After retiring home she went into her garden for a walk about noon and found a laurel tree and sat under it. She prayed to the Lord saying “O God of our Fathers, bless me and hear my prayer, as thou didst open the womb of Sarah and gave her a son of Isaac.” She went on muttering in her sorrow and deplorable condition she found herself.

After some time in the mountains the Archangel Gabriel appeared to Joachim. After comforting Joachim the Archangel told him that Anna would bring forth a daughter and that they should call her Mary. By his vow she should be devoted to the Lord from her infancy. The archangel instructed him to go to the Golden Gate in Jerusalem to meet his wife who was very anxious for his return. 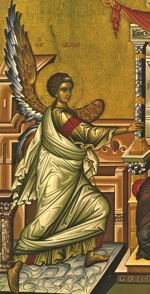 About the same time the angel appeared to Anna telling her that the Lord had heard her prayer and that she would conceive and bring forth a child. She vowed to bring the child whether it was male for female as a gift to the Lord so the child could minister to Him her whole life. Gabriel also instructed Anna to go to Jerusalem to meet Joachim at the Golden Gate.

They both followed the direction of the Archangel and met with great joy at the Golden Gate. The following Day Joachim brought his offerings to the temple and they returned home and Anna conceived by Joachim’s seed.