Dormition of the Virgin Mary the Theotokos
Procession and Internment

Next came the procession from the home of Saint John to the Mount of Olives where The Most Holy Thetokos was to be buried along side her parents. The holy Apostles Peter, Paul, James and others of the Twelve Apostles carried the funeral bier upon their shoulders, and upon it lay the body of the Ever-Virgin Mary. St John the Theologian went at the head with the resplendent palm-branch from Paradise. The other saints and a multitude of the faithful accompanied the funeral bier with candles and censers, singing sacred songs. This solemn procession went from Jerusalem to the Garden of Gethsemane.

Many of the jews who did not believe in Christ upon hearing the chanting and seeing the procession left their homes and joined in the procession. This stirred up many of the people and temple servants were sent to disperse the procession. There was a mystical cloud that was above the bier which descended and surrounded the procession like a wall of protection Angels struck the pursuers with blindness and they began to fight each other.

There was a Jewish priest Athonios who was in the procession He was filled with envy and yelled out, “Look, what honor surrounds the body of her who bore the impostor Who destroyed he law of our fathers.” He then rushed through the crowd up to the bier and tried to cast the virgin’s body to the ground When his hand barely touched the casket an invisible angel stuck off his hands with an immaterial sword of divine vengeance. He collapsed crying out, “Woe is me!.”

He acknowledged his sin and turned to the Apostles and asked them to have mercy on him. Peter then ordered the procession to stop. He said to Athonios, “Now thou hast received thy just fruits. Know that the Lord is the God of vengeance; the God of vengeance hath spoken openly and thus we cannot heal thee of thy wounds. Only our Lord Himself can do this. Athonios then cried out, “I believe that He is the Savior of the world foretold by the prophets–He is the Christ. From the very first we saw that He was the Son of God, but being darkened by malicious envy, we did not acknowledge the greatness of God openly, but delivered Him to death, though He was guiltless. But by the power of His divinity He arose on the third day, putting us all to shame. We attempted to conceal His resurrection by bribing the soldiers, but we could do nothing, as the glory of the Resurrection was manifest and spread abroad.” The Apostles rejoiced at his confession. Athonios fell down in front of the bier and worshiped Christ, son of God born of the Virgin Mary. Immediately he was healed. Some who were struck with blindness as part of the rushing mob acknowledge their sin and approached the bier touching it with faith. When the apostles touched their faces with the Heavenly palm branch there were healed.

Her place of burial was a family tomb. The holy Ancestor-of-God Joachim had himself reposed at 80 years of age, several years after the Entry of the Most Holy Theotokos into the Temple (November 21). St Anna, having been left a widow, moved from Nazareth to Jerusalem, and lived near the Temple. At Jerusalem she bought two pieces of property: the first at the gates of Gethsemane, and the second in the valley of Josaphat. At the second locale she built a tomb for the members of her family, and where also she herself was buried with Joachim. It was there in the Garden of Gethsemane that the Savior often prayed with His disciples.

When the procession arrived their they laid down the bier and wept. The Christians gave their last kiss and fell down in front of her body. They shed many tears and it was not until evening that the body could be placed in the tomb. this was done with great honor while chanting psalms and prayers. 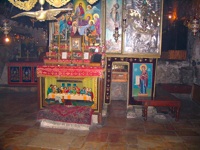 The most-pure body of the Mother of God was buried in the family tomb. Christians honored the sepulcher of the Mother of God, and they built a church on this spot. Within the church was preserved the precious funeral cloth, which covered Her all-pure and fragrant body.